Frank Durbin was and is one of my heroes. He was a crewchief with HMM-265 when we went to Vietnam aboard USS Boxer in April, 1966. 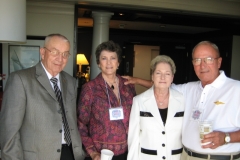 I was a rookie copilot just a year out of flight school with little experience to judge, but he was known as a great crewchief. (I confess that I was too busy just trying to stay out of trouble up front to notice much of what was going on in the back.)

He also had a reputation for guarding his aircraft closely when it was in the hangar, especially when it was waiting on critical parts (AOCP). Anyone who came near to scavenge a part for another aircraft was likely to be met with a very large wrench and a measure of watchful truculence; Frank was NOT going to see his beloved ’46 turned into a hangar queen.

All of that earned him my great respect, but is not why Frank has a place in my pantheon of heroes. I did not get to know him personally until long after we both had retired and I became active with the Association. He attended the 2012 reunion in San Diego with his cancer already in an advanced stage and you could tell that he was in a lot of pain. You had to look closely to see it, though. He did not complain or even grimace but bore it with grace and quiet fortitude. Terry told John Long that Frank endured quietly and fought to the very end, as John noted in Frank’s RTB post.

If I should ever have to bear that kind of load I can only hope to do it with half of Frank’s grit. And that is why Frank Durbin is one of my heroes.