Major Richard H. (Dick, Rollo) Langenfeld passed away in his ice fishing hut on Lake Poinset near his home town of Castlewood, SD, on January 29, 2005, just short of his 67th birthday. He was buried in the Castlewood Cemetery on February 2. He served with HMM-265 from 1965 to 1967 and went to Vietnam with the Squadron on USS Boxer.

Richard, son of George and Ida (Haberly) Langenfeld, was born February 7, 1938 in Castlewood. He grew up and received his education there and graduated from Castlewood High School in 1956. He attended South Dakota School of Mines and Technology in Rapid City and South Dakota State University in Brookings before entering the United States Marine Corps on November 29, 1959. 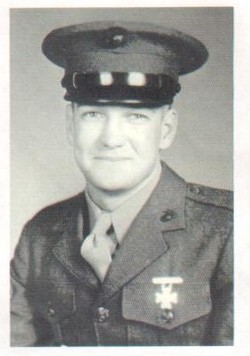 Dick served 22 years with the Marines, including three tours of duty in Viet Nam, two as a helicopter pilot and one tour as a fighter pilot. He was awarded two Distinguished Flying Crosses. Here is the story of one of those DFCs.

DANANG, S. VIET NAM – The Marines in the small patch of the Vietnamese jungle were holding their own after being ambushed by a large force of Viet Cong but their ammunition was starting to run short. The unit radioed for a fresh supply and Capt. Richard H. Langenfuld, 28, of Castlewood, S.D., a helicopter pilot, answered the call that won him the Distinguished Flying Cross “for heroism and extraordinary achievement in aerial flight.” Capt. Langenfeld flew the emergency ammunition supply to the pinned-down Marines.

The Marine Corps said the troops on the ground didn’t have time to clear a landing zone for Capt. Langenfeld’s helicopter so the captain decided to carry the ammunition in a net and lower it by cable to the ground through the dense jungle canopy.

Heavy enemy fire greeted the chopper on its first run over the drop zone and it was unable to come to a halt over the area. Capt. Langenfeld pulled away and then made another pass. As he lined the helicopter up for another try, he was informed by a crewman that they had taken some hits on the first pass and one fuel cell was leaking badly. There was an estimated 20 minutes of fuel left.
The Corps said Capt. Langenfeld reached the drop zone and steered the helicopter as far into a small clearing as he could. The enemy opened up on him with automatic weapons and he and the crew could hear and feel bullets strike the defenseless helicopter.

After the load was dropped to the waiting Marines below, Capt. Langenfeld lifted the “chopper” out of the zone and nursed it back to Marble Mountain airfield to the south. After landing safely, the crew counted nine bullet holes. The citation to Capt. Langenfeld read in part, “due to his heroic action without regard to the danger involved, the beleaguered Marines received their much needed supply of ammunition.”

He was united in marriage to Robbye Jo Hicks on February 16, 1969 in Pensacola, Florida. After his retirement as a Major in 1982 he returned to Castlewood where he helped run Ida’s Cafe and also managed and cooked at the Castlewood Golf Course. 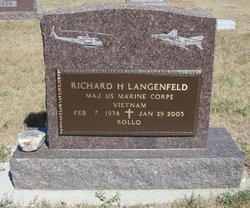 Grateful for having shared his life are his mother, Ida Langenfeld of Estelline; seven brothers and sisters; an aunt and two uncles; 21 nieces and nephews; 16 great nieces and nephews; and a host of other relatives and friends. Dick was preceded in death by his father and second mom, Vera Cannon. [Excerpted from Find a Grave]