John Long, Association president, learned on 17 Jul 2015 by phone from Shirley Cameron, the widow of Douglas L. Cameron, that Doug passed away on 10 August 2014 from the results of exposure to agent Orange. We have no information on Doug aside from the obituary published in the San Diego Union-Tribune on September 14, 2014 and posted at Legacy.com. The accompanying photo in dress blues shows him wearing aircrew wings so he likely was a crewchief or gunner. Please email Webmaster@hmm-265.org if you know anything more. Let’s try to add some detail to Doug’s final tribute. 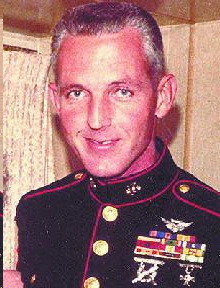 Cameron, Douglas L. 05/22/1942 ~ 08/10/2014 OCEANSIDE — Doug, we miss you so much. Remembering you is easy, we do it every day. It’s just the pain of losing you that never goes away. Doug served honorably for the Marine Corps for over 23 years. Many of the young men he trained went on to be commissioned. Doug is survived by his wife Shirley May Cameron; son Scott and his wife Janice; grandchildren April and Leo; family dog Quincy, and the Cameron Bichons. Thank you to the doctors and nurses at Camp Pendleton Navy Hospital. Resting with the Angels…Aloha, until we meet again. ~Semper Fidelis~ [Published in San Diego Union-Tribune on Sep. 14, 2014.]