I’d sometimes meet George for lunch in D.C. during airline layovers. By then he was chief of the SEC’s Enforcement Division and we’d joke about how, all those years ago in Vietnam, he settled on a post- Marine Corps career. Sitting in our Marble Mountain hooch, he described the world as a sinister place that could devolve into chaos at any moment and above all, he was focused on surviving whatever happened. When he got back, he said he would return to college to pursue accounting because, as he put it, “there would always be an endless supply of cheats and crooks,” and that equated to job security.

George came from a hard scrabble family in inner city Baltimore where folks got by anyway they could. Two years of college was as far as finances allowed and the MARCAD program was his ticket out and up. For George, flying in the marines was a necessary hazard en route to a better life but he seemed to have an innate anxiety about flying. Combat missions, CH-46 mechanical failures and emergency-groundings were concerns we all lived with but seemed to weigh more heavily on him. Trips to the flight surgeon for nebulous ailments and sniffles were perhaps a manifestation of his anxiety but he never turned down a mission.

Compared to the rest of us who generally regarded Vietnam as simply a combat assignment, George was curious about the country and he had an empathy for the Vietnamese, particularly the hooch maids we came to know through daily interactions. 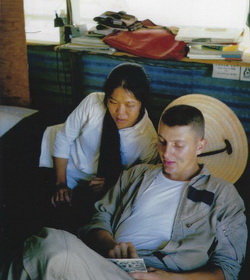 He even attempted to learn rudimentary Vietnamese from Van, our hooch maid, while the rest of us were content conversing in pidgin English. Perhaps it was the tight money of his youth that fostered a special empathy for those maids and he always made a point of assuring that we all kicked in our share of script on Van’s pay day.

Back at New River, shortly before we both left active duty in 1968, George and I flew a brand new CH-46D to Maryland to check out his college opportunities. With CH-46 fatal mechanical-related crashes continuing, he was especially spooked about climbing into even a brand new helicopter. Yet, the cross country flight, at government expense, was the only way to check out college opportunities, so he took the risk. We donned parachutes and made the trip around 8000 feet, reasoning that if the transmissions, drive shafts and rotors convulsed, there would be enough altitude to bail out.

To make ends meet in college, George stayed in the reserves, and in something of a psychological back- flip, he accepted the Corps’s offer to transition to A-4 attack jets! But high-g pull-ups, air combat maneuvering and section IMC cloud penetrations were more than he bargained for. On a reserve weekend at NAS Norfolk, a slight runway overrun, leaving the landing gear stuck in dirt, prompted the skipper to offer George a CH-34 flying slot. He jumped at it and spent the remainder of his reserve time practicing mostly emergency autorotations.

George thrived in his civilian career, achieving high ranking positions at the SEC and NASDAQ and he was recognized for making meaningful and lasting contributions to the accounting profession. He loved his family, had a strong moral compass, and a soft spot for the hard working everyday folks who make society work.