LtGen Charles H. “Chuck” Pitman, Marine’s Marine, Naval Aviator Extraordinaire, and Plank-Holder at Trader Jon’s in Pensacola, returned to base on 13 Feb 12, 2020. The following obituary is taken by permission from an extensive tribute with 12 photographs published by the Pensacola News Journal on February 14, 2020. His distinguished career also is memorialized at TogetherWeServed. However, we who knew him know that a bare recital of the official facts does not really tell Chuck Pitman’s story. To find more just search “LtGen Charles Pitman.”

Retired U.S. Marine Corps Lt. Gen. Charles “Chuck” Pitman passed away February 13, 2020, at the age of 84, after a long battle with cancer. Described by his contemporaries as a “Marine’s Marine” and a “real American hero,” Pitman was renowned even among his fellow Marines for his courage, his tenacity and his leadership. 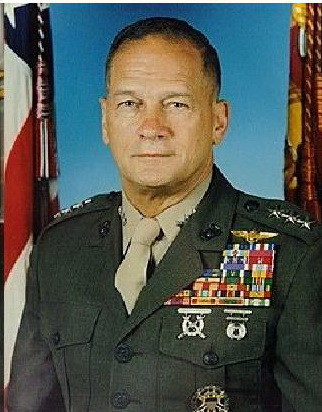 Over a nearly 40-year military career, Pitman piloted just about every aircraft in the Marine Corps. He flew three combat tours in Vietnam and had aircraft shot down by enemy fire seven times. He helped New Orleans police take down a rooftop sniper, and led a rescue mission to free 52 American hostages being held captive in Tehran.

Above all, Pitman stood as a model, mentor and motivator for generations of Marines.

“What he was known for was his sheer courage and selflessness on the battlefield,” said retired Marine Corps Col. Chris Holzworth. “No one could match his courage.”

Pitman was born in Chicago in 1935. He began flying at 14, enlisted in the Naval Reserve in 1952 and the Marine Corps in 1953. By the time he retired in 1990, he had worked his way up to a three-star general and his commands had included the Marine Aviation Training Support Group in Pensacola, a role as assistant wing commander for the 3rd Marine Aircraft Wing in California and the command of the 1st Marine Aircraft Wing in Japan.

He logged more than 12,000 flight hours in his career, including piloting jets and attack and reconnaissance helicopters.

When it came to people, however, Pitman always remained grounded.

“He had a great smile, and great charisma, and people loved him,” said Chris Dosev, a retired Marine and local business owner.
At right, Ed Rouse, a spokesman for the Marine Corps League of Pensacola, recalls a funny story about retired U.S. Marine Corps Lt. Gen. Charles “Chuck” Pitman on Thursday at Goat Lips Chew & Brewhouse in Pensacola. Pitman passed away Thursday at the age of 84.

Ed Rouse, a spokesman for the Marine Corps League of Pensacola, said of Pitman, “He was a Marines’ general. He wasn’t pompous about anything. He’d say, ‘My name is Chuck,’ and you’d say, ‘Yes general,’ and he’d say, ‘No, I’m just Chuck.’ … He was just a down to earth person, but he had a presence about him. He was like a father.”
As news spread of his passing, about two dozen retired Marines gathered at Goat Lips Chew and Brew House in Pensacola to trade war stories and have a toast in the general’s honor.

Retired Marine Corps Lt. Col. David Glassman, said “I stopped everything in my world today when I got the message. … I mean, who in our community has a combat record, a leadership record and a stature within the Marine Corps leadership that can compare to Chuck Pitman?”

“Nobody!” the group said in response.

There are a lot of stories out there about Pitman’s courage and determination, but two of them certainly rise to the top of the heap.

In 1973, Pitman was the commanding officer of the Marine Air Reserve Training Detachment in New Orleans. Pitman saw on TV that a sniper named Mark Essex had shot and killed nine people and was holed up on the roof of a Howard Johnson hotel.

He sent a message to his superiors that he was going to help and “left before the message could come back and say, ‘No, don’t do it!’ ” retired Col. Ed Southworth recalled with a chuckle. “He was the originator of ‘don’t ask permission, ask forgiveness’.”

Pitman jumped in a CH-46 transport helicopter, picked up a team of police officers, flew them to the rooftop and after several volleys of exchanged gunfire, Essex was killed.

It was a situation where Pitman put his career on the line to do what he thought was right, because, as Rouse said, “that was his character.”

In 1979-1980, Pittman was selected to lead a rescue mission aimed at freeing 52 Americans who were taken captive at the U.S. Embassy in Tehran during the Iranian Revolution.

Dubbed “Operation Eagle Claw,” the plan was to fly eight MH-53 minesweeper helicopters into the Iranian capital and evacuate the hostages. The effort was waylaid by bad weather and miscommunications from the outset, and was ultimately aborted when one of the helicopters crashed before reaching the operation zone.

Pitman had said it was a tough period, but he previously told the News Journal that all of the military’s special ops units began more integrated training and operations based on lessons learned from that mission.

Some of Pitman’s combat awards include a Silver Star — awarded for extracting 16 reconnaissance personnel from the mountains of Vietnam under conditions of darkness, bad weather and heavy enemy fire — as well as four Distinguished Flying Crosses and a Purple Heart.
Friends and fellow veterans gather Thursday at Goat Lips Chew & Brewhouse in Pensacola to talk about the life of retired U.S. Marine Corps Lt. Gen. Charles “Chuck” Pitman.

Pitman spent several years in Pensacola during his career, and he ultimately retired to Pensacola Beach where he became a community fixture with his photo on the wall at most local bars.

“That guy would show up — that Marine officer, three-star general — would show up, and he would be part of whatever it was that was going on, especially in support of our Marines and our Marine organizations such as the Marine Corps League,” Glassman said. “The events, the 5Ks, anything we were doing he would be there.”

Pitman is survived by his wife, two sons and two daughters.